Medicare for All: Should It Be Feared by Health Plans? 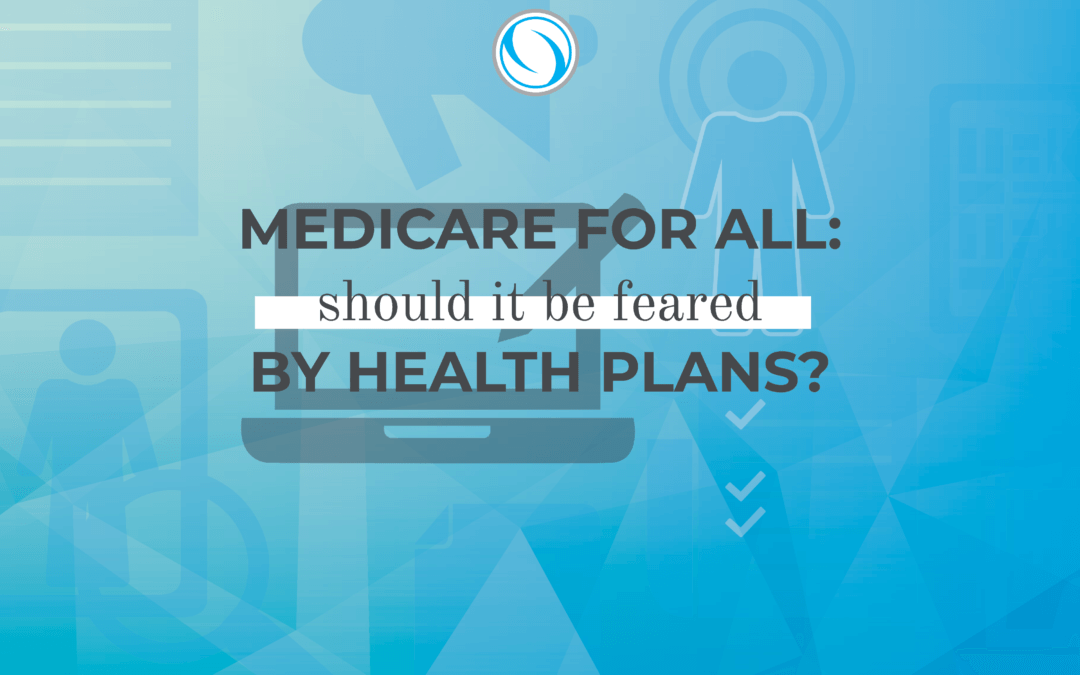 Worried about “Medicare for All”? You certainly aren’t alone, but health plans could view this as an opportunity. 6 Myths and facts revealed.

Proposals for single-payer healthcare models — sometimes termed “Medicare for All” — top today’s healthcare news. Strong opinions abound and Medicare for All is riding a wave of popularity now due to rising healthcare costs and those impacts on the consumer. None of us have any idea if it will happen or not, but if it does, there are some common misconceptions about if or how it would work, particularly from a health plan perspective. Let’s take a look at six of these prevalent fears and their potential impact.

1. MYTH: Medicare for All would erase profitability in healthcare.

Getting to the heart of the matter, many health plans are concerned that broader access to Medicare would reduce their profits. Is it true that government-assisted healthcare programs are less profitable than others? According to Susan Morse, Senior Editor at Healthcare Finance, health insurances would lose profitability in the marketplace, but others contest the validity of this statement.

One analyst notes that what we term “single-payer” is a bit misleading, as Medicare resembles multi-payer health care models the world over. Indeed, Medicare Advantage depends on a large number of private insurers to work and this is unlikely to change — especially given the unforeseen profitability of the Medicare Advantage marketplace after the Affordable Care Act. CMS anticipated a 12% increase in Medicare Advantage enrollees in the 2019 Open Enrollment season, many of whom will “likely find lower or no premiums and improved benefits,” according to officials.

Fact: In reality, Medicare Advantage plans have been some of the most profitable sectors for health plans.

Faced with treating uninsured or underinsured patients, providers are actually better off treating those who are covered by Medicare or Medicaid. High out-of-pocket costs can be hard to chase down.

2. MYTH: Sudden access to healthcare coverage by some segments of the population (the uninsured and underinsured) would create too much risk.

Risk of uncertainty is something that many health plans fear will increase costs and become a potential unintended consequence of Medicare for All. To evaluate if this is as large a threat as it may seem, it may be helpful to look at how profitability has soared under the Affordable Care Act despite a sicker risk pool. In 2017, medical loss ratios were down to 70% (a stark decrease from 2015 when they reached over 100%). Insurers raised premiums to correct the market and reflect risk, but researchers say that increased profits indicate the risk was more than covered. This means that the market has been able to correct for risk and has perhaps overcorrected already.

Fact: Uncertainty already exists in the healthcare market, and value-based care is seen as a way to offset any potential increased market risk by increasing access to lower cost, preventive care.

Delaying medical care can actually prove more costly in the long run, and it’s exactly the kind of position that those without access to good health coverage find themselves in. The Federal Government reports that those without access to healthcare are more likely to die prematurely and less likely to receive a medical cure. Once they do receive access to health care, medical conditions may have worsened to necessitate a more costly treatment.

On the flip side, recently-released research in JAMA Cardiology shows a positive effect on “population-level differences in rates of cardiovascular mortality among states that expanded Medicaid under the ACA.” Broader access to healthcare works for all of us.

With broader access to affordable healthcare proposed by “Medicare for All,” payers worry that the more profitable private insurance market would disappear.

4. MYTH: With broader access to healthcare, there will be a run on healthcare services, creating shortages.

If everyone suddenly has access to healthcare, will it be harder than ever to find care — let alone, quality care? Let’s look at what happens in our country when senior citizens gain access to Medicare. Do they “overuse” healthcare because they think it’s “free”? Of course not. Additionally, the concern exists that fewer and fewer people will want to become doctors if their pay is significantly reduced; nearly half of doctors are concerned about pay cuts if a single-payer system came to fruition.

FACT: Healthcare is not an expendable resource. Furthermore, value-based initiatives are focused on streamlining care through prevention and increased “self-service” (like telemedicine).

It’s true that with broader access to healthcare, our old care models will need to change. But with wasteful healthcare costs on the rise, it seems the industry will be shaken up whether access broadens or not. “Well over half of Americans already say they have a favorable view of Medicare for All. Though approval falls off when confronted with details such as higher taxes, it is clear that the electorate is searching for something big,” writes Elisabeth Rosenthal for Kaiser Health News.

5. MYTH: This model would create unprecedented complexity in healthcare.

This one is admittedly, a little tough to imagine for us given our line of work. We see unimaginable amounts of complexity in healthcare, and we actively work to manage complex processes for our clients through our payment integrity technology solution.

It’s bold for some to tout complexity as a con of Medicare for All; it would be hard to get more complex than the industry already is. However, it’s worth noting that analysts  advise that judging a single-payer program’s viability on Medicare or the ACA just doesn’t add up. It’s also over-simplifying matters to reduce Medicare for All to an expansion on current Medicare benefits, though it’s tempting to do so (especially during the upcoming primary season). With various proposals on the table, ranging from lowering Medicare’s qualification age to 55 to a full-on single-payer system, it seems that there’s still a lot to work out.

FACT: Greater standardization is now mandated by the government. This is the first wave in an all-out war on complexity, one that Medicare for All would likely benefit from.

6. MYTH: Medicare for all won’t work… because we’ve never done it before.

Is failure a sure bet? I think we all know the old saying “The best laid plans of mice and men often go awry,” and certainly rolling out a program like Medicare for All would come with its own kind of challenges. But the idea that broad access to healthcare is new is false. Western countries have implemented some version of broad healthcare access for decades — mostly to positive reviews.

FACT: Medicare and Medicaid coexist relatively successfully. This disproves the claim that another healthcare program would “sink the ship.”

It’s hard to say with any certainty what the future of healthcare in the country looks like, but one thing IS for sure: change is inevitable. The old system just isn’t working anymore.

Bottom Line: Costs are going up, for health plans and their members.

Single-payer proposals are gaining traction for a reason. This environment provides a prime opportunity for health plans to embrace the conversation surrounding health plan options. Offering solutions around lowering healthcare costs for everyone is a good first step.

No matter how this situation plays out, one thing is certain: cost containment would be an even bigger priority for health plans in a Medicare for All model. Proactive measures, such as adopting comprehensive payment integrity technology like Pareo®, can prepare you to cover all possible scenarios and better equip you for success.