Prepare to Meet the Future with Data

Earlier this year, we wrote about the ONC’s proposed information blocking rule and how it serves as an opportunity for health plans. The proposed rule faced a public comment period (which closed last month) during which major industry concerns were voiced. The consensus by many seems to be that ONC’s rule lacks clarification in key areas while inadvertently increasing complexity (and cost) in others.

But as they say, “the writing’s on the wall” for health data interoperability and broader access to electronic health information. Where does this leave health plans? A recent study by Deloitte predicts that healthcare organizations are standing at the precipice of innovation. But first, let’s look at the feedback that the proposed information blocking rule received.

One thing we can agree on at this point: interoperability is a major objective for our industry. But those who would be affected by the Information Blocking Rule have asked the ONC to revise or even revoke the current rule. This includes the Federal Trade Commission, who despite being consulted on the proposed rule, issued a letter asking the ONC to consider refinements. Notably, eHealth Initiative (eHI) offered the following comments and concerns:

Scope of “Electronic Health Information” is too broad, should be defined

Conditions and Maintenance of Certification (APIs)

Too complex and costly as proposed

Too much risk to providers and patients, specifically the proposed “Click Yes to Continue” model does not adequately portray data security risk to patient

Healthcare actors should be defined in the final rule

Greater Data Sharing is the Goal

The ONC has stated that greater interoperability is the goal of the proposed Information Blocking Rule. Improved data sharing is a worthy objective for health plans because it’s an easy effort to prove value on. Health plans have a competitive edge over their counterparts when they are more integrated with providers and members. In addition to priming plans to be compliant with whatever final rule is based, improving access to data is also key to readying for other initiatives, such as alternative payment models.

Of course, we know that total healthcare data interoperability sounds like the answer to all your challenges. But once the hard work begins of solving this problem, it can feel like data sharing at the level required is next to impossible. We’re here to tell you it’s not; interoperability is a realistic goal with the right technology.

Let’s frame the objective of the ONC’s Information Blocking Rule in a more approachable way: Healthcare stakeholders need real-time, accurate and contextual data access. And the real challenges? Healthcare organizations still struggle with interoperability, largely due to issues like administrative complexity. Messy (as in, unstructured) or missing data is still a problem as well.

We know that our industry is on the precipice of innovation. The recent study from Deloitte referenced above and in our prior article posits healthcare is on the precipice of a “20 to 30 year industry transformation. The industry forces and the disruption that’s upon us are true indicators that we’re going to be going through a cycle of innovation.” Innovation made possible by radical data interoperability. 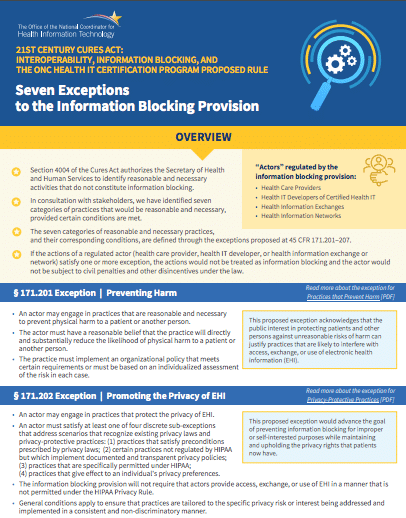 ONC’s Information Blocking Rule has 7 exceptions. Do you know what they are?

The Promise of Big Data

Improved access to data is considered a consumer-driven shift, one often compared to the Amazon experience where a consumer can have on-demand access to personal information. But getting personalized, real-time electronic health data at the click of a button is a lot more complicated than it sounds. And it requires a special relationship that has historically been difficult: high-level collaboration between payers and providers.

Yet this demand is exactly the kind of opportunity health plans can seize upon as they search out competitive ways to utilize big data. Examples can be seen in the use of predictive analytics to mitigate risk, noted in this article as a “massive moneysaver” by one health plan who made a big IT investment. Reams of data are available to health plans — all that’s lacking is the right way to connect and analyze it.

“Improving relationships with members and providers is already a focus for health plans, and data sharing is another way to accomplish that goal.”

Health plan of the future? It starts with data sharing.

One way of looking at the Information Blocking Rule is that it’s a proposed answer to a problem that health plans can take control of now. Improving data sharing isn’t just a proactive approach to anticipated regulation — it’s becoming an essential business function for health plans. To get started, health plans can focus on these three areas:

Take advantage of opportunities to break down data silos by fostering relationships with providers, members and vendors

Look for existing technology that can support these goals: bring disparate data together, simplify data modeling, and provide a transparent communications platform

The future of data sharing is now. Pareo® is how.

Today, Inc. revealed that ClarisHealth, provider of the industry’s leading payment integrity platform for health plans, is No. 2362 on the 2022 Inc. 5000 list. This is the third year running that the company has ranked on the list.

ClarisHealth Awarded No. 251 on Financial Times’ List of Fastest Growing Companies in the Americas 2022

ClarisHealth, leading provider of payment integrity technology for health plans, today announced it is No. 251 on the Financial Times' list of the fastest growing companies in the Americas for 2022.

A Vision for Payment Integrity